Captain America’s initial origin story is told in his first published appearance in Captain America Comics #1 (March 1941; hereafter CAC). Over the years numerous Timely/Marvel writers have enhanced, embellished (and sometimes confused!) his story. Two significant “modern” story arcs have added additional depth and context to the background behind “Operation Rebirth,” the program that created Captain America.  Truth:  Red, White and Black (7 issues, 2003) linked the program to a joint German-American eugenics venture initiated after WW I.  Then during Marvel’s 70th Anniversary year, Ed Brubaker (who was also writing Captain America at the time) introduced the idea of a “Race for the Super-Human,” with Germany and the U. S. turning earlier eugenics findings toward more advanced “meta-human” experimentation (see The Marvels Project, 8 issues, 2009-10).

Following is a brief overview of the most significant interpretations of how Steve Rogers became America’s first Super-Soldier (with events unique to each rendition noted in bold type).  In our next post, we’ll try to piece together a more cohesive narrative.[1] 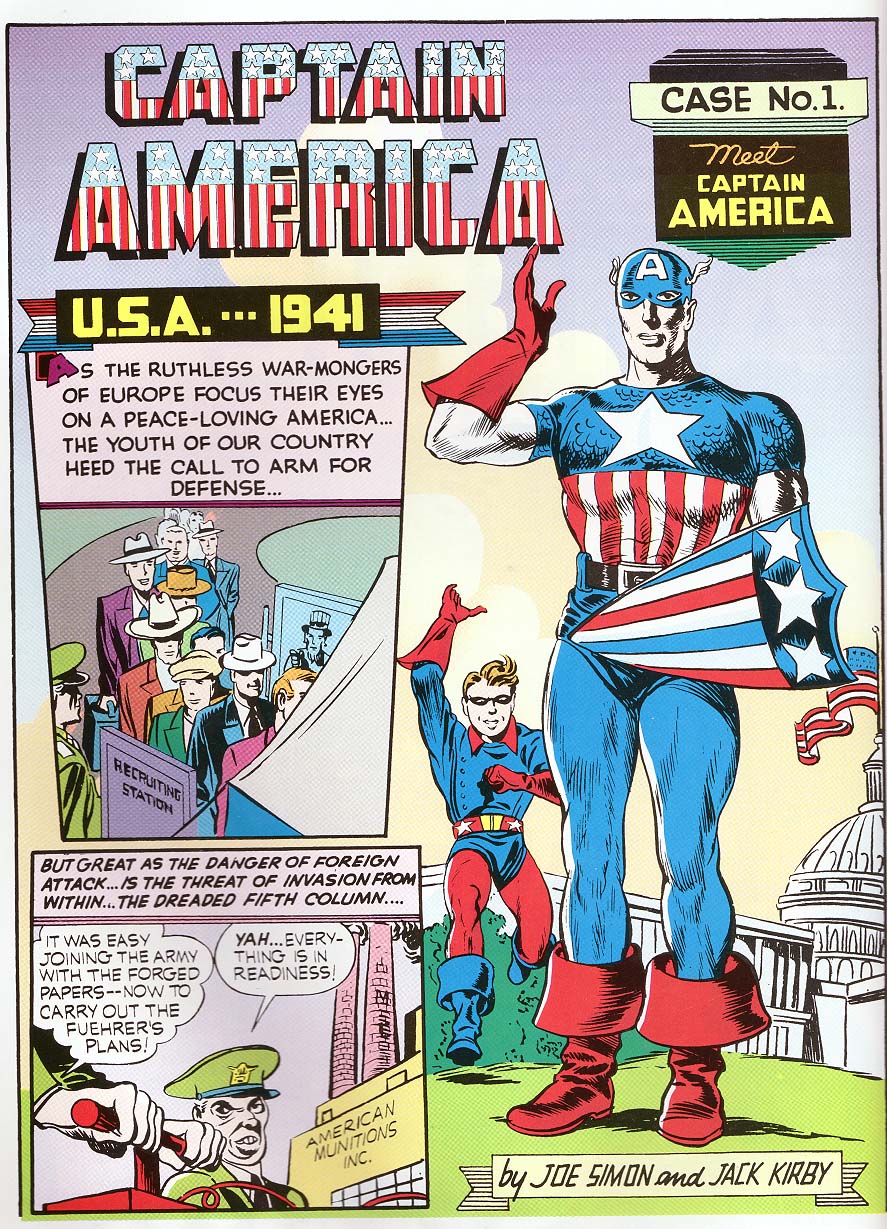 Cover shows Cap punching Hitler; splash page text reads, “1941–As the ruthless war-mongers of Europe focus their eyes on a peace-loving America . . . the youth of our country heed the call to arm for defense. But great as the dangers of foreign attack is the threat of invasion from within–the dreaded fifth column.” President Roosevelt meets with two “high-ranking military officials” (he refers to one as, “General”) in the White House. “What would you suggest, gentlemen . . . a character out of the comic books? Perhaps the Human Torch in the Army would solve our problem!” (this is an interesting early reference that indicates Cap not only will inhabit the same “universe” at the Original Human Torch, but that this “universe” also has its own version of “Marvel Comics”!).  FDR then introduces J. Arthur Grover, “head of the FBI, who has a plan.” 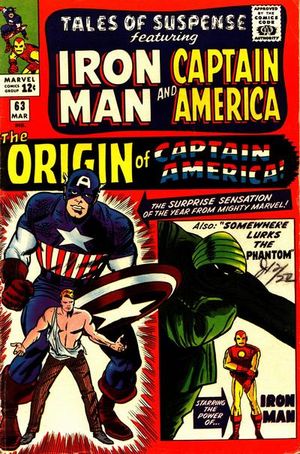 Large 1941 on opening splash w/caption: “Out of the dark, dramatic danger-packed years of World War II . . . out of the still-smoldering ashes of the fateful past . . . the Mighty Marvel Comics Group dares to revive, with glowing passion, and pride!” The artwork is very similar to original 1941 panels; some almost identical. Roosevelt speaks of “Operation Rebirth” (first reference) with the military officials. “Grover” is now “Dr. Anderson,” no longer with FBI. Most significantly, “Reinstein” is now identified as Prof. Erskine.  Rogers is handed a large vial of “chemicals” and drinks the “Super-Soldier Serum.” 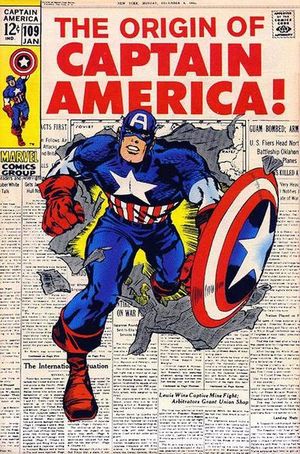 Cover banner proclaims, “The Origin of Captain America.” Cap recalls his origin story for Nick Fury. It follows the ToS #63 story with some elaborations and different perspectives. Rogers is shown for the first time volunteering for service but being turned away after his physical.  After he is injected with  secret serum. Next you shall see how I speed up its process—and how it will affect his body cells.” To complete the process, Rogers is “bombarded . . . potent, invisible vita-rays” (1st reference). 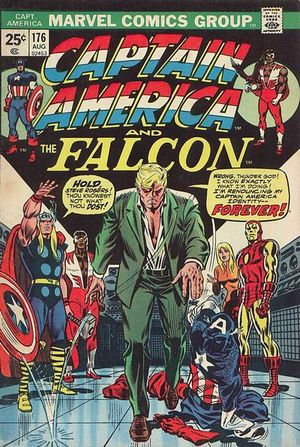 Opens with a multi-page review of Cap’s origin story. “Once I was a boy, a skinny, gawky kid, just out of high school—born and raised in Manhattan, so I know all about the world. Went to the movies a lot, and never missed the newsreel. I knew the Nazis were rotten, from the minute I set eyes on them . . . . I knew where my duty lay! Steve Rogers, all of 18 (first age reference) had to become a soldier! I hit Whitehall Street the next morning, but . . . .” From there the now-familiar “Operation Rebirth” story is reviewed. 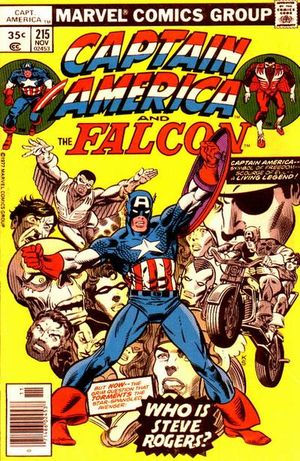 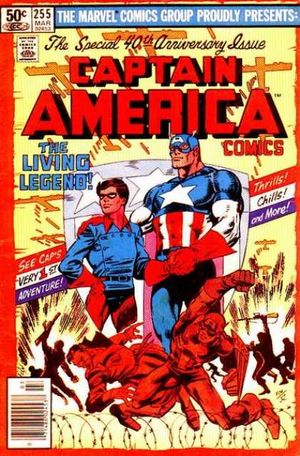 Pres. Roosevelt reviews the file on “Operation Rebirth.” This is the first published story that shows Rogers viewing the newsreel of “the Nazi war machine in its relentless march across a war-torn Europe!” “It’s as if half the world has gone mad,” Steve reflects as he leaves the theater. “If the Nazis aren’t stopped soon, there won’t be a free man left alive anywhere!”
CA Annual #10 (May 1991) opens with a 2-page “The Origin of Captain America” by D.G. Chichester. Basic “Rebirth” elements are shown with single-panel summaries of Cap’s WWII career, death, and “modern” recovery by the Avengers. Earlier confusion about how the super-soldier serum was administered is resolved: “Carefully screened and chosen as an ideal subject for the highly experimental process, Rogers underwent a grueling battery of oral, intravenous, and radiation treatments.” 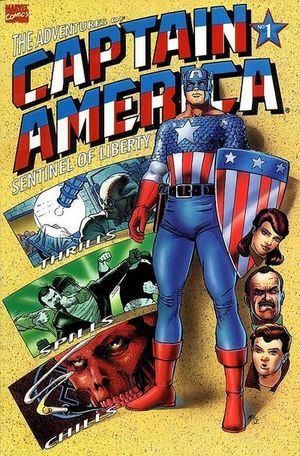 This is the most extensive retelling of Cap’s origin ever, developing a much more elaborate pre-rebirth scenario and recounting early adventures not depicted anywhere else. It also provides more “back story for the young Rogers.”[2]

[1] The Official Index to the Marvel Universe, Avengers, Thor, and Captain America #1 (2010) notes that although many vesions of the “Operation Rebirth” story highlight the 1941 date, “subsequent chronological analysis places its events from Fall 1940 to March 1941.”

[2] While this is an ambitious, creative, and quite entertaining version of the story, the Official Index to the Marvel Universe asserts, “much of its telling is not in continuity.” Yet the 2010 limited series Steve Rogers, Super-Soldier has a direct tie-in with this series, featuring Lt. Cynthia Glass from this series, referring to her as Rogers’ first love. And flashbacks in She-Hulk #10 (Jan. 2015) depict young Steve’s encounter with the German villain Saurespritze, who also appears in Adventures #1-3.

Next up:  Crafting a cohesive origin story . . .