In the12-issue series, Avengers Forever (1998-99, Kurt Busiek), Captain America and several fellow Avengers past, present, and future are drawn through time by perenial foe Kang the Conqueror to help him fight his own future self, Immortus. Brought from just after the “Secret Empire” storyline in 1975 (between #175-176), after which he gave up the CA role for a brief time, Cap is shown throughout the story to have lost the resolve and confidence that has made him such an iconic hero. 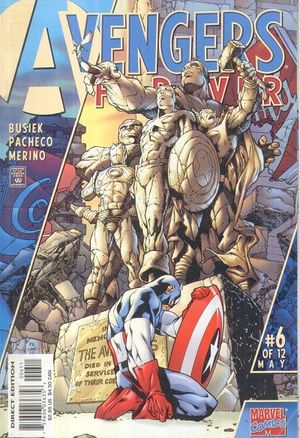 In the midst of an early battle (#1), the unusual assembly of Avengers “turn to Captain America for some sign, some decision . . .” only to find confusion and inaction. In this time-and-space spanning epic, Cap & Co. encounter alternate universes (and alternate versions of Avengers) in which the team’s “evolution” has had a negative impact on human history. These anomalous time streams are the result of Kang’s meddling, and a mysterious group of three “Time Keepers” are determined to eliminate them (and Kang). This group of Avengers has been assembled by Kang to help keep this from happening.

Among the alternate “versions” of Cap that appear in Avengers Forever are the “Shieldsmen” of the Galactic Avenger Battalion (#1); a shield-wielding Kilraven (#4, with Cap’s then-new photonic shield); and a great host of alternate Avengers who appear in the climactic battle of #12: 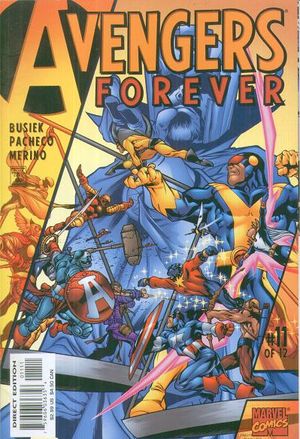 Throughout the history of the Marvel Universe (and beyond), dozens of variant visions and versions of the Living Legend have appeared.  The following list is a work-in-progress; it does not include those from Earth-616 who have actually served as Captain America (William Naslund, Jeff Mace, William Burnside, Bucky Barnes, Sam Wilson); nor does it include others who have been transformed by the Super-Soldier Serum such as Isaiah Bradley and Clint McIntyre, since all have been subjects of previous posts.  More details (and visuals) of all these characters can be found at http://marvel.wikia.com/wiki/Marvel_Database 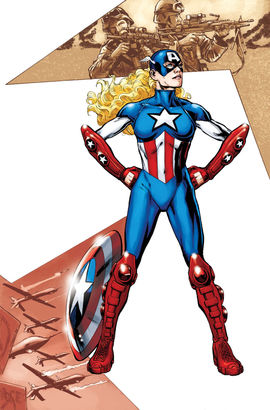