In 1905 Freud wrote a series of essays on sexuality which associated sex— or libido — as the driving force of our desires and impulses. More significantly, he claimed this drive formed very early in childhood. Viennese society was scandalized.  “What is more natural than that we should persist in looking for happiness along the path on which we first encountered it?”  Freud wrote.  “Sexual love has given us our most intense experience of an overwhelming sensation of pleasure and has thus furnished us with a pattern for our search for happiness.”

Freud claimed that sexuality began at birth, not puberty. He was accused of violating the innocence of childhood.  But for him, bringing repressed sexual desires into conscious understanding through analysis makes it possible to obtain a mastery over them. “It can be said, Freud wrote, “that analysis sets the neurotic free from the chains of his sexuality.”  Freud’s “liberation” of human sexuality, while scandalous at the time, gave birth to the “sexual revolution” that was a defining part of 20th century social development.  In the wake of Freud’s ideas came Alfred Kinsey’s infamous reports on human sexuality, the “swinger society” and “free love” counter-culture of the sixties, and GLBT “outing” and social activism that has transformed sexual boundaries from the seventies to the present. 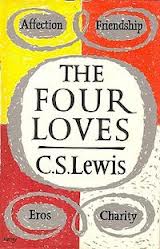 In 1963 Lewis published The Four Loves, a book which identified four ways in which human beings express and experience love.  He identified each with a particular Greek word for love (transliterated into English here)

Only agape love, Lewis believed, allows us to unconditionally “love our neighbors” as the Bible commands. All the other “loves” are contingent upon some “valuing” of the object of love.  Freud says that human beings have always been internally in conflict between insatiable personal desires and the social prohibitions imposed upon us by family and community expectations.  Our inability to properly reconcile these tensions results in psychological, physiological, and social disease and dysfunction.