Steve Rogers, the boy who would become Captain America, was born in New York on July 4, 1917 the only child of Joseph and Sarah Rogers. His parents are described as immigrants living on New York’s Lower East Side who have fallen on hard times.  Steve Rogers’ youth was spent in poverty; his early manhood shaped by the Great Depression.  His father was a sometimes construction worker who served in the 1st Battalion, 26th Infantry (the “Blue Spaders”) in the Great War and died of influenza in 1926.  His mother struggled, working two jobs, taking in washing, until she fell ill and died in 1934.

Most stories over the years depicting Steve Rogers’ youth focus on the experiences that shaped the man who would become Captain America.  The new CA series (just launched in 2013) is the seventh “modern” series to follow after the original Captain America Comics of the 1940s-50s, has featured numerous flashback glimpses into Steve’s childhood years.  His unemployed father is shown as a desperate, violent man who brutalizes his wife and turns to drink in his frustration.  Steve’s mother is shown possessing the qualities that continue to guide the adult hero.  “You listen close’ she tells him at one point.  “You always stand up.”  Young Steve does just that for bullied friends, and when poverty drives him to steal money from the local drug store to pay for Mom’s medicine, he’s compelled by shame to confess the crime and work off the debt.
Despite these setbacks, Steve kept up with his schooling and is often shown to be a voracious reader—“Especially of fantasy!” FDR once commented while reading from Roger’s file.  The president continued, “It seems that the boy also had a talent for art, but he kept his love of art, and of books, a secret to avoid taunts and beatings at the hands of his peers.” 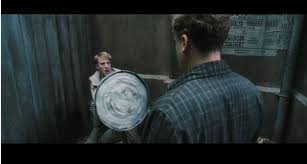 Other glimpses into Steve Rogers’ youth have appeared in various stories over time.  Described and depicted as a frail weakling, he’s shown at age 8 being rescued from bullies by an older neighborhood tough, Davey Fortunov and at other times by best friend Arnie Roth (both show up later in Cap’s life, having surmised the connection between their childhood friend and the Sentinel of Liberty).

A story in a 1994 Holiday Special has Cap a mission “in upstate New York, around Albany,” where he comes across an abandoned farmhouse. “Wait, I know this place,” He realizes. “It’s where my Grandfather lived—sixty years ago!” (c. 1930) As he creeps near, Cap is flooded with memories of visiting his Grandfather when “the Depression was still in its early days.”  He also remembers the old man’s wisdom: “America’s based on principles, boy—‘specially the principle of freedom. The fight for freedom goes on. It’s every citizen’s duty not to forget th’ battles fought before nor to shirk their own. You keep that in mind, boy.” (This tale is a bit difficult to reconcile with the often cited “immigrant parents” detail; perhaps only his father was a first-generation immigrant and this is his maternal grandfather.  To complicate things even further, there are stories which depict Steve Rogers as having a Revolutionary War ancestor of the same name).

In CA #270 (1982) Cap passes by his old Elementary School on the Lower East Side, and he pauses to reflect on his days there. “This place was part of me for so many years.” He finds his old classroom with some old desks still in place. “I can still recall sitting in that front-row seat, as Mrs. Crosley tried to shove some knowledge into our heads!” A memory panel depicts the teacher before the board, on which is written, “Civics Test Monday.” “You know,” she says to her pupils, “You children are very lucky to be living in a country as free s this one. The United States offers its citizens more rights than any other nation in the world! But along with those rights come certain duties as well! It’s the duty of each one of you to see this land stays free . . . to see that justice is extended to all!” Cap’s memory of Mrs. Crosley fades with the words, “Don’t let me down.”  Cap murmers, “I . . . I won’t.”

Issue 7 of the Sentinel of Liberty series (1999, also the source of the FDR quote above) featured vignettes of Steve Rogers in the 1930s at this old elementary school (being tormented, of course, but also with the strains of FDR’s “Fear Itself” speech drifting from a radio in the background); in 1934 at his mother’s death, in 1938 working as a WPA artist finishing a mural in a New York subway” and in 1940 in the oft-depicted scene of Rogers in a New York theater watching a newsreel account of the Nazi blitzkrieg across Europe.

After most renditions of this newsreel incident, Rogers emerges from the theater determined to enlist, but of course he is too frail to serve in the Army and is rejected at various induction centers.  Finally, he’s approached by a military officer and offered a chance to serve his country through an experimental program.  A particularly creative version of this story from the 70th Anniversary Special (2009) sets the scene in Brooklyn, where Rogers tangles with “fifth columnists” before even being approached about the program.  In this confrontation, he displays remarkable “Cap”-like qualities long before becoming the actual hero.

This imaginative story of our young hero is recalled by his war-time partner, the even more youthful Bucky Barnes.  Bucky’s closing observation provides a fitting conclusion for this segment of our story.  “When he was still frail and slight, inside he was still the man that he is now.  The thing that makes Captain America great . . . is Steve Rogers.”

Stories depicting Steve Rogers’ childhood and youth can be found in—

Variations of the newsreel/induction center scenarios are depicted in—