This narrative attempts to bring together in a seamless account all the diverse elements depicted in the comics listed in Part 1.  The base story line is that of CAC #1 (March 1941), with later additions and embellishments as documented.

After watching a newsreel of Hitler’s advances in Europe, Steve Rogers immediately attempts to enlist but designated 4-F: “You’re much too frail for military duty!” A distraught Rogers protests, “But there must be something I can do—a place for me!” His plea is overhead by an officer (“General Phillips” in ToS #63, but addressed as “Colonel” in CA #109). “If you’re really serious about wanting to play a part in all this,” the officer says, “Would you become a human guinea pig—in a deadly experiment?” (CA #176, #255, AdvCA #1; in the latter, General Phillips is accompanied by an Erskine-like doctor who repeats, “perfect, absolutely perfect,” while sizing up the frail young man).

Rogers is taken by young, dark-haired woman (Lt. Cynthia Glass) to secret training center in Washington, D. C. area. He and three other potential Rebirth candidates undergo weeks of intensive training prior to the Rebirth procedure.[1] Rogers’ training is overseen by Lt. Col. James Fletcher, a.k.a. “The American Eagle” (perhaps the “Colonel” in CA #109?). The project leader (identified only as “Abraham” at first) is a German scientist. Rogers, selected by a process of elimination as the best candidate, writes a letter that night dated Jan. 13, 1941. Fletcher and “Abe” meet on Jan. 28 to discuss fears of infiltration; Abe relates the importance of “vita-rays” to the process and gives his “formula” to Fletcher for safekeeping (all AdvCA #1)

Dressed in civilian attire, two military officers and Rogers drive to a “sinister looking curio shop” in “a shabby tenement district” of Washington, D.C. The “old shop keeper” at first draws a hidden gun, then, satisfied with their identities, leads them “up a musty stairway” (depicted in new panel) to a secret room. The old woman pulls off a mask, revealing herself to be a young woman (dark hair; Lt. Glass?) whom “Grover” identifies as “Agent X-13” (CAC #1, agent not identified in ToS #63; in CA #109, Rogers makes the same trip to the curio shop, but meets “Reinstein, the world’s greatest physicist” upon entering the shop.  Describing the moment years later, Rogers recalls, “that day in 1941 when a skinny youth heard a voice behind a sliding door and walked with nervous steps through it to face a famous scientist the whole world thought was dead!” (CA #215).
Rogers follows the Professor upstairs, while the undisguised young woman remains downstairs “on guard.” Confusion over Reinstein/Erskine is resolved (CA #255), when Rogers meets “Dr. Anderson, Director of Projects” and “Head Scientist, Professor Reinstein.” Rogers exclaims, “Reinstein? Why, that’s Dr. Abraham Erskine, the famous biochemist. But I thought he’d died last spring in an auto crash!” “That’s what we wanted the world to believe, my boy,” Erskine replies, noting “Reinstein” was a code name.

The military officers (and Dr. Anderson) are seated in an observation room with others already there. In a laboratory outside a large glass window, they see a frail young man. “It has taken us months to find the proper 4F specimen whose body will react properly to our new tissue-building chemical!” The scientist in the room (as yet unidentified here and in the original story) says, “Step forward, Rogers.” Next panel elaborates, “Steve Rogers! Too puny, too sickly to be accepted by the Army! Steve Rogers! Chosen from hundreds of similar volunteers because of his courage, his intelligence, and his willingness to risk death for his country if the experiment should fail!” (ToS #63). In the original 1941 story, the as-yet unidentified young man is injected with a “strange seething liquid.” In ToS #62, Rogers is handed a large vial of “chemicals” and drinks. 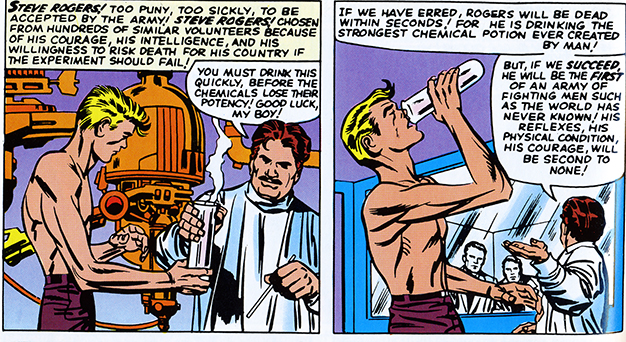 “Gentlemen,” the scientist informs the observers, “This distinguished young volunteer has already been injected with my secret serum. Next you shall see how I speed up its process—and how it will affect his body cells.” To complete the process, Rogers is “bombarded . . . potent, invisible vita-rays” (CA #109). 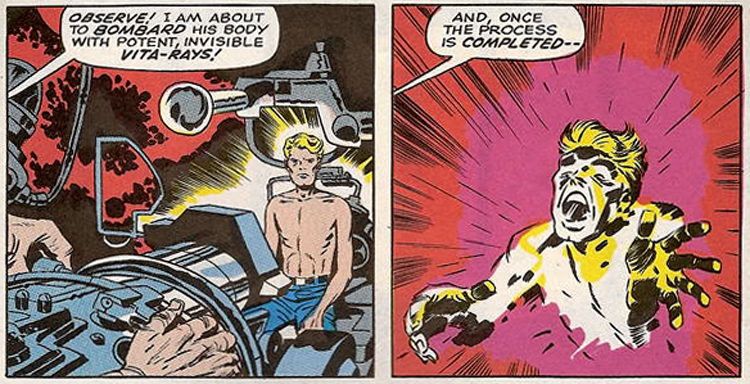 Rogers changes before their eyes into a perfect human specimen, to be “The first of a corps of super-agents whose mental and physical ability will make them a terror to spies and saboteurs.” “We shall call you Captain America, son!” the scientist proclaims. “Because, like you—America shall gain the strength and the will to safeguard our shores” (CAC #1; CA #176). “Project Rebirth is a resounding success! Through biochemical and radioacteeve means, ve haff created ze next step in human evolution . . . . I give you ze American Super-Soldier!” (AdvCA #1). 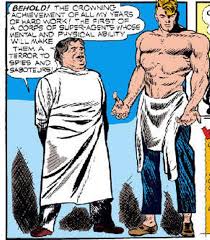 BUT . . . one of the army observers (not seemingly one of the men who came with “Grover”) “is in the pay of Hitler’s Gestapo!” The infiltrator, later identified as “Heinz Kruger, who was smuggled ashore from a submarine by “loyal Fifth Columnists” (CA #109), pulls a gun and shoots the scientist. A vial of serum (not a syringe) is also shattered, and “Grover” (Col. Fletcher in AdvCa #1) is shot as well. Rogers reaches through the observation window, pulls the gunman through it, and dispatches him with two punches. In his “frantic effort to escape” the spy becomes entangled in equipment and is electrocuted. Recalling the event later, Cap admits to more aggressive response than intended: “I didn’t mean to hit him so hard—but I didn’t know my own strength! And I wasn’t sorry! Nothing left of him but charred ashes . . . a fate he well deserved!” (CA #176).

Afterward, in a brief scene switch to “the Wermacht headquarters of Third Reich in Berlin,” where “evil forces have received word of Project: Rebirth’s initial success,” the Red Skull makes a cryptic appearance and is identified as the mastermind behind the plot (AdvCA #1). 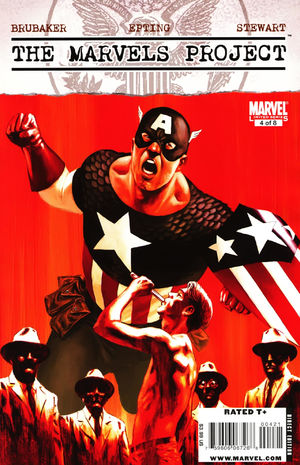 [1] The Super-Soldier program is variously referred to in stories as “Operation Rebirth” or “Project Rebirth.” The Marvels Project #4 (Feb. 2010, Brubaker and Epting) also depicts Rogers going through two months of extensive testing in preparation to become “America’s first Super-Soldier.” As he does so, Heinz Kruger, under his alias of Frederick Clemson, Special Agent for the Ministry of Foreign Affairs, prepares to attend “the big day—the Game Changer.”