C. S. Lewis was working simultaneously on the material that appeared in these two works–perhaps his best known writings outside of the Narnia books.  Mere Christianity was a compilation of a series of radio talks Lewis gave on BBC Radio in 1942.  Lewis was writing The Screwtape Letters at the same time he was preparing scripts for those radio programs.  Reading the two together, as I recently did for a class, made for an interesting experience.  Both communicate similar and important truths about Christian understanding of reality, but each does so using very different rhetorical and artistic approaches. 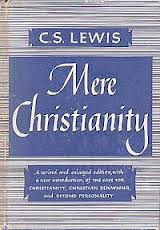 In Mere Christianity (MC) Lewis the Christian teacher employs his gifts of profound clarity in language and deep simplicity in illustration to demonstrate the “sensible realities” built into the Cosmos of God’s creation.  He reveals God’s truth by showing how it is woven through the fabric of human experience and may be comprehended by the rational mind of any honest seeker.  He gives us simple propositions ( “First, human beings, all over the earth, have this curious idea they ought to behave in a certain way, and cannot really get rid of it.  Secondly, they do not behave in that way.”).  He assembles logical inferences and conclusions on such foundations (“The moral law is not any one instinct or set of instincts; it is something which makes a kind of tune [goodness or right conduct] by directing the instincts.”).

At times, the discourse in MC is brusquely matter-of-fact (“Christianity is a fighting religion.”), other times it is more of a folksy wisdom (“We have to take reality as it comes to us; three is no good jabbering about what it ought to be like or what we should have expected it to be like.”).  Always, always, he’s pointing us to First Principles that—despite our determination to avoid or redefine them–provide the moorings for civilized existence and the basis of Christian reality (“The real job of every moral teacher is to keep on bringing us back, time after time, to the old simple principles which we are all so anxious not to see . . . .”). 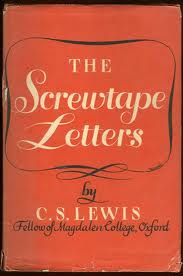 In The Screwtape Letters (SL), Lewis the Christian artist crafts a remarkably creative articulation of the same deep truths, but as they might be seen from the other side of the mirror.  Again, the propositions are made—but now how crafty; how ironic! (“Once you have made the World an end, and faith a means, you have almost won your man, and it makes very little difference what kind of worldly end he is pursuing.”).  Consequent inferences and expositions seem just as rationally derived, yet through a completely perverted lens of reality (“Our cause is never more in danger that when a human, no longer desiring, but still intending, to do our Enemy’s will, looks round upon a universe from which every trace of him seems to have vanished, and asks why he has been forsaken, and still obeys.”).

Advice and admonitions from Wormtongue’s “affectionate uncle” provide a kind of “back-handed” vision of the truths which must not be seen or even acknowledged.  In permitting his “patient” a good book and simple walk, poor Wormtongue is derided for such an act of unmitigated ignorance (“you allowed him two real positive Pleasures . . . .  The characteristics of Pains and Pleasures is that they are unmistakably real, and therefore . . . give the man who feels them a touchstone of reality.”).  Here we also are given a demonic inversion of First Principles:  “The horror of the Same Old Thing is one of the most valuable passions we have produced in the human heart” and continuing, “But the greatest triumph of all is to elevate this horror of the Same Old Thing into a philosophy so that nonsense in the intellect may reinforce corruption in the will.”

This juxtaposed reading allows us, I think, to receive the same “lesson” (the nature of “Mere Christianity”) in two distinct forms.  MC itself shows us clearly who God wants us to be:  “servants who can finally become sons.”  But SL cleverly reveals the true desires of our True Enemy, who sees us as “cattle who can finally become food.”  Lewis shows us human reality from both sides of the mirror; in doing so he hopes to show us who we really are.