Images of Joy in Lewis’s “Surprised” and “Pilgrim’s Regress”

The idea of “Joy” is among C. S. Lewis’s most famous and familiar contributions to Christian literature.  Its influence on “the shape of his early life” is the central theme of Surprised by Joy (SJ), and its attainment is the irresistible impetus of young John’s quest in The Pilgrim’s Regress (PR). 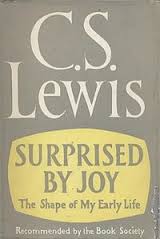 Lewis seems initially hesitant to name the thing at all for fear that naming it would fix it in place. Joy is too transcendent to be individually defined; yet it is also such a visceral reality that one must at least attempt descriptions of encounters with it.  Lewis describes three experiences in SJ which occurred in the innocence of childhood.  First was his brother’s toy garden, which evoked “a sensation of desire; but desire for what?”  Here we first encounter the word “longing” as a descriptor; he felt himself “stirred by a longing for the longing that had just ceased.”  The second he describes as “the Idea of Autumn,” encountered through reading Beatrix Potter’s Squirrel Nutkin.  “One went back to the book, not to gratify the desire . . . but to reawaken it.”  The third came through poetry, in which a passage from Tegner’s Drapa (“Balder the beautiful/Is dead, is dead –“) evoked a fleeting desire for “Northernness” of “almost sickening intensity” and left him immediately “wishing I were back in it” as it passed.

Lewis’s descriptions of Joy also have an element of distance in them.  The best works of Matthew Arnold, he writes, gave him “a sense, not indeed of passionless vision, but of a passionate, silent gazing at things a long way off” (SJ). He later describes his older perceptions (after “Joy had left”) of “Northerness” as an “endless twilight of . . . remoteness, severity”; and “with that plunge back into my own past there arose at once, almost like a heartbreak, the memory of Joy itself.”  In reading Siegfried and the Twilight of the Gods, Lewis recognized what had been lost and equated “the distance of the Twilight” with “the distance of my own past Joy.”  Both, he realized, were unattainable, they “flowed together into a single, unendurable sense of desire and loss.”  More pointedly, Lewis frankly offers, “Joy is distinct not only from pleasure in general but even from aesthetic pleasure.  It must have the stab, the pang, the inconsolable longing” (all SJ).

That sense of “inconsolable longing,” of course, it what motivates the Pilgrim in his search for the illusive Western Island that serves as an image of Joy in PR.  Upon first seeing a vision of the Island though the window in the garden wall, he immediately found himself “straining to grasp” not the island itself, but the long-forgotten childhood memory it evoked.  “There came to him from beyond the wood a sweetness and a pang so piercing” that he forgot all else, concluding, “I know now what I want.”  What follows is a quest for the Island itself (a mistake, of course), during which innumerable worldly substitutes offer themselves as replacements (and are invariably found wanting).

And of course Lewis himself (in SJ) relates the many such substitutes for Joy that tempted him along his own journey.  The beginning of clarity arrived when he realized “the very nature of Joy makes nonsense of our common distinction between having and wanting.  There, to have is to want, and to want is to have.”  God gives us experiences of Joy to inspire our longing for Him, and He allows us the pangs of loss and longing that come from trying to find Joy in things other than Him—even in our own memories of Joy.  When young John finally “sees” his Island (along with a sacred throng, not merely on his own), “the pain and the longing were changed and all unlike what they had been of old:  for humility was mixed with their wildness, and the sweetness came not with pride and with the lonely dreams of poets nor with the glamour of a secret, but with the homespun truth of folk-tales.”  And he realized that “the Island should be different than his desires, and so different that, if he had known it, he would not have sought it.”  It was the Island’s Creator, not the Island, which drew him.