Captain America in the Golden Age of Comics

Steve Rogers’ early adventures as Captain America unfold in relative sequence throughout 1941 in the pages of Captain America Comics. Since the U.S. is not yet involved in the war, Cap & Bucky go into action mostly against Nazi spies, “Bund” operatives, assorted criminals, and occasional bizarre monstrosities. Betty Ross, who became a series regular, debuted in the second story of CAC #1, captured by members of a Nazi spy ring she has been “investigating for the U. S. Government.”

The third story in issue #1 introduces the Red Skull, a villain destined to become Cap’s greatest nemesis. Cap seems to have heard of the Skull, but at the end of this initial encounter, this “Red Skull” is revealed to be aircraft industrialist George Maxon, who appears to commit suicide. The cover of issue 2 (April 1941) again shows Cap & Hitler, obviously in Germany. In the issue’s second story Cap and Bucky make their first appearance in Europe, where they actually do punch out Hitler and Goehring![1] The Red Skull returns #3 (May 1941), still identified as “Maxon” (having survived the poison thought to have earlier killed him). After using his “Power Drill” to dig up NYC, he again “dies” in a bomb blast at the story’s end. Issue #5 (August 1941) takes Cap and Bucky to the Pacific for the first time, where they encounter the “Dragon of Death” super submarine (an unusual vessel described as “Asiatic” and controlled by “Orientals”).[2] 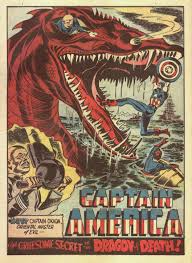 Cap’s exposure broadened in two new titles, both published in the summer of 1941. Young Allies was Timely’s version of the popular “boy gang” comics of the time, but this gang also included Bucky and the Human Torch’s sidekick, Toro. The gang’s first adventure took them around the world (Germany, Russia, China, and across the Pacific) and up against the Red Skull. Cap and the Torch have to step in to rescue the boys in the end, the two heroes’ first Golden Age meeting. All-Winners Comics was launched as a character showcase title, and every issue of its five-year run featured a Captain America story.[3] 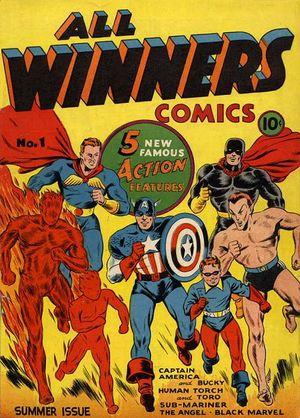 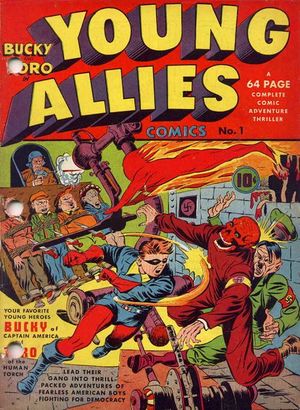 By the end of the first year’s run of CAC, only a few of Cap’s 40-some stories showed him in action outside of the U.S. But soon after America’s entry into the war after Pearl Harbor, Cap and other Timely heroes began taking the fight to the Japanese. The cover of All-Winners #4 (Spring 1942) shows Cap leading the charge flanked by Torch, Namor, Bucky, Tory, Whizzer, and the Destroyer. Cap is shown punching Tojo on the cover of CAC #13 (April 1942). Both titles featured stories set in the Pacific and/or Japan; each hit the newsstands in early 1942. 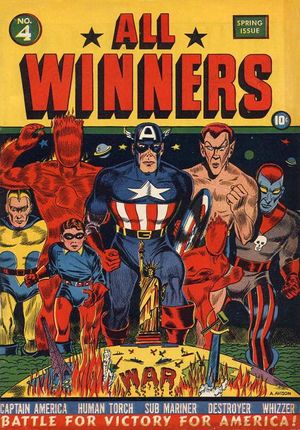 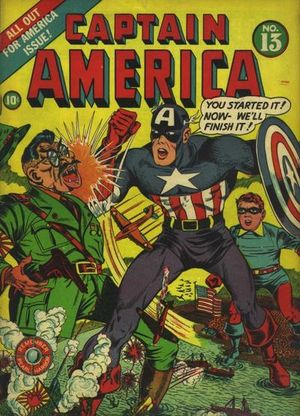 Not long after his “modern day” revival in Avengers #4 (1964), Cap began to share the Tales of Suspense title with fellow Avenger Iron Man. As we’ve already seen, Lee and Kirby retell “The Origin of Captain America” in ToS #63, and the next several issues continue to draw from material from early CAC stories. ToS #65 (May 1965) retells the first Red Skull story (CAC #2) in more or less the same detail, but with some significant differences. Here neither Cap nor Bucky seem to have previous knowledge of the Red Skull. When this “Skull” is revealed as “Maxon,” he claims he’s “not the real John Maxon.” He escapes rather than committing suicide, and Cap and Bucky still believe this man is the Red Skull.

In ToS #66 (June 1965) Lee & Kirby give us “The Fantastic Origin of the Red Skull,” a story that resolves the “Maxon/Skull” mystery. The story opens with Cap in Germany–with no explanation as to how or why he got there–a captive of the Red Skull! “Tell me,” the Skull says, “How did you learn that Maxon wasn’t the real Red Skull last month?” Cap replies it was because he was so easily defeated, “And I had heard of your fighting prowess!” 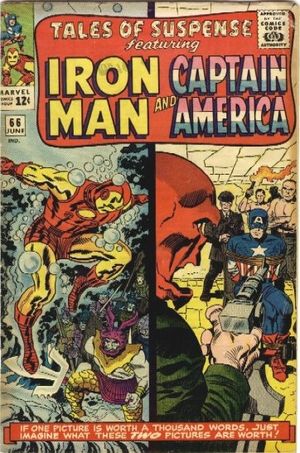 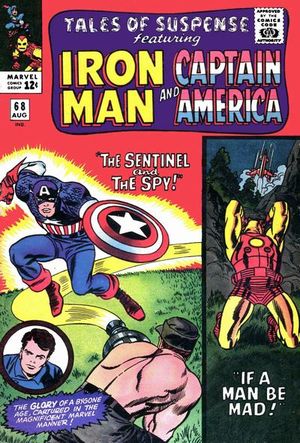 The “real” Skull now reveals his “true” origin: an orphan neglected and unwanted, he was a bellboy at a hotel where Hitler, on a whim, selected him to be trained “to be evil personified.” Hitler gave him a uniform, mask, and name: “Henceforth, you shall be known as the Red Skull—answerable only to me!” More backstory indicates Skull’s infamous activities in Europe began well before this encounter with Cap. He had grown in power second only to Hitler, to the point of having control of entire naval wolf packs (which sank a convoy Cap was with, leading to his capture). Cap is given a chemical potion that makes him renders him the Skull’s mental slave.[4] Over the next two issues (#67-68) Cap encounters Hitler himself, is rescued by Bucky, and returns to Britain, where his Army unit is training.

With the U.S. now directly involved in the war, CAC covers during 1942-44 more often showed Cap and Bucky involved in war-related activities, but many of his Golden Age stories continued to be centered on his home-base at Camp Lehigh. His forays into Europe, Africa, and the Pacific theater increased significantly after CAC #31 (Oct. 1943), but stories involving home-front plots, criminals, and occult/sci-fi themes continued to appear regularly. Cap’s shelf-presence expanded with his becoming the feature character in USA Comics #6 (Dec. 1942; continuing through issue #17 in 1945). Along with Torch and Namor, Cap was also featured in All-Select Comics #1-10 (1943-46). The stories in these two titles run the gamut from war action to mystery to monsters. 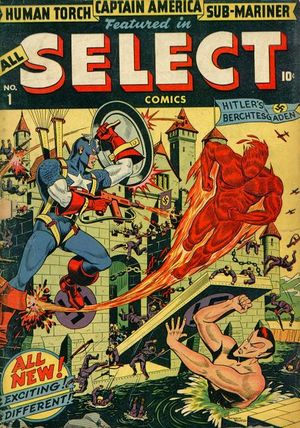 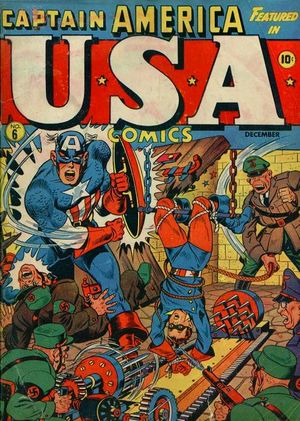 cover art (both) by Alex Shomburg

Almost always, even when Cap was shown in war action, the details (and often the locations) in Golden Age stories were sketchy, generic, and always fantastical. It would not be until the modern Marvel Age and the magic of “retconning” that the “real stories” of the Living Legend of WW II would finally be told.

Next Up:  Cap Among the “Marvels”

[1] Since the U. S. is not yet officially involved in the war, this is perhaps a propaganda-motivated exaggeration of Cap’s early activity in Europe (as many Golden Age stories are later said to be). In a flashback in Avengers #213 (Nov. 1981, Jim Shooter), Steve Rogers is shown “on a recon patrol with [his] unit” in Germany. “It was early in my career,” he recalls, “after I had established myself but before I had seen much front line combat.” The Official Index to the Marvel Universe places this flashback during the events of CAC #2, but specific dates for events are difficult to pin down at this point unless they are clearly mentioned.

[2] The Dragon Ship shows up again near the end of the war in an Invaders story in the short-lived Marvel Universe series (#1-3, 1988).

[3] Cap made guest appearances in Young Allies #1-2, 4-7, 9 and 12. In the Young Allies 70th Anniversary Special (Aug. 2009), Bucky remembers his “first mission” with the group: “Of course, the propaganda office played up that exploit, calling us the “Young Allies.” For a while, we even had our own comic book. The comics exaggerated the story, inventing wild fantasies about us. The art was more caricature . . . it made us all look like twelve-year-olds. And, of course, the publishers altered my friends’ names as well.” The re-imagined tale names the “allies” as Patrick O’Toole (“Knuckles”), Washington Carver Jones (“Whitewash”), Geoffrey Worthington Vandergill, and Henry Yosuf Tinklebaum (“Tubby”).

[4] “Maxon,” it seems, was a mere puppet for the real Red Skull, whose name is revealed to be Johann Schmidt in CA #298 (1984). The Red Skull also appears in Young Allies #4, CAC #7 and #16, and All-Select Comics #2 (all 1942). He is constantly “dying,” then inexplicably reappearing. In “The Red Skull’s Deadly Revenge” in CAC #16 (July 1942) he’s shown breaking out of prison. His green jumpsuit is at first shown with a Japanese military flag on the chest, then switches toward the story’s end to the more familiar swastika! Once again, he is shown “killed” at the end. Finally, Cap fights the Skull (now in a yellow jump suit) again in All-Winners #12 (Fall 1944).