Captain America Among the “Marvels”

Captain America’s origins as the “Living Legend of WW II” began in the pages of Golden Age Captain America Comics and several other Timely titles published during the war years (see earlier posts for details).  But for most Cap fans now, his exploits a WW II hero have been largely the product of “retconning”–the wonderfully creative Marvel affinity for re-imagining and connecting Golden Age stories with the evolving Marvel Universe.

This new development in Cap’s narrative is rooted in his “return” to the modern MU in the landmark Avengers #4 (1964), followed by reinterpretations of Golden Age stories in Tales of Suspense #63-68 (1965-66).  Roy Thomas’ Invaders series and What If? #4 from the 1970s, practically Ur-texts in the “retconning” process, will be discussed in detail in an upcoming post.  A key effort in crafting a more comprehensive Marvel mythos for the modern age is found in Kurt Busiek & Alex Ross’s masterful Marvels series (1994). 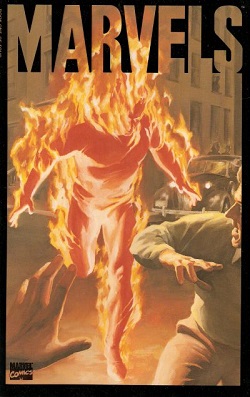 Over four wonderfully-creative issues, Marvels chronicles the emergence of super-humans in the mid-20th C. as viewed from the perspective of photographer Phil Sheldon. Sheldon dubbed these new hyper-humans “Marvels” as he recorded their impact, both for good and ill, for New York newspapers and ultimately in a book of that title.

In first issue, Sheldon and a colleague walk down the street as “Fall turned to Winter and Forty turned to Forty-one.” They pass two kids playing “good guys vs. Nazis,” and Sheldon’s friend pauses: “Take a listen, Phil.” 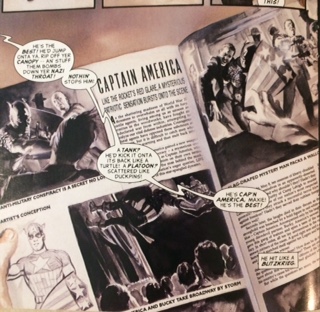 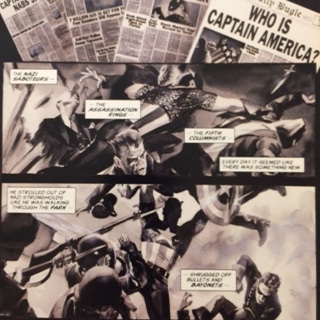 A nearby youngster, pulling an issue of Life Magazine out of his back pocket (with a nice two-page spread of the new phenomenon that is Captain America), proclaims,

“I wanna be Cap’n America.  He’s the best! He’d jump onta ya. Rip off yer canopy—and stuff them bombs down yer Nazi throat! Nothin’ stops him! A tank? He’d kick onto its back like a turtle! A platoon? Scattered like duckpins! He’s Cap’n America, Maxie! He’s the best!”

Sheldon’s take on the new hero?

He hit like a blitzkriek. You couldn’t go anywhere without hearing about him. Nobody admitted to knowing anything at the Department of the Army—but they were sure smug about something . . . . The Nazi saboteurs—the assassination rings—the Fifth Columnists—every day it seemed like there was something new. He strolled out of Nazi strongholds like he was walking through the park. Shrugged off bayonets—and we ate it up like candy . . . . He was as much of a Marvel as the Torch or the Sub-Mariner—but he was never a threat like they were. Was it because they were outsiders—and he was one of us? Our own personal American champion?

After Pearl Harbor and the American entry into the war, Sheldon becomes a war correspondent and writes home to his wife.

“The Marvels are here to stay. And there’s more of them all the time—Citizen V, the Whizzer, the Blue Diamond. And nobody has any idea what the future’s going to bring. But do you know what? It’s going to be one heck of a ride finding out!”[1]

The same year that Marvels was published, CA #423 (Jan. 1994) featured a story set in “early 1941,” that opens with a classic Torch-Submariner battle over New York. In this story, Namor kidnaps FDR, and Cap and Bucky go to his rescue. This story shapes up as the first meeting of Cap and Namor (the two did not meet in Golden Age comics until the war’s end). The Marvel’s Project storyline depicts Namor stalking the streets New York “in the summer of 1941,” plotting his revenge against “the Flaming Man” and all humanity. The cataclysmic confrontation between Fire and Water devastates New York (echoing somewhat events from Human Torch Comics #5, Sept. 1941) and ends with Namor being taken out by Captain America’s shield. As Cap and the Torch look upon their stunned foe, Cap queries, “Who is this guy?”[2]

July 1941. Cap is at the docks in NYC, busting up some “swastika-sympathizing saboeurs” who have infiltrated the dock workers. The scene is covered by Daily Bugle reporter Jeff Mace, who nabs a fleeing bad-guy. Meeting after the altercation, Cap extends a grateful hand to Mace, who responds, “It’s an honor, sir! I’d do it again in a New York minute!” 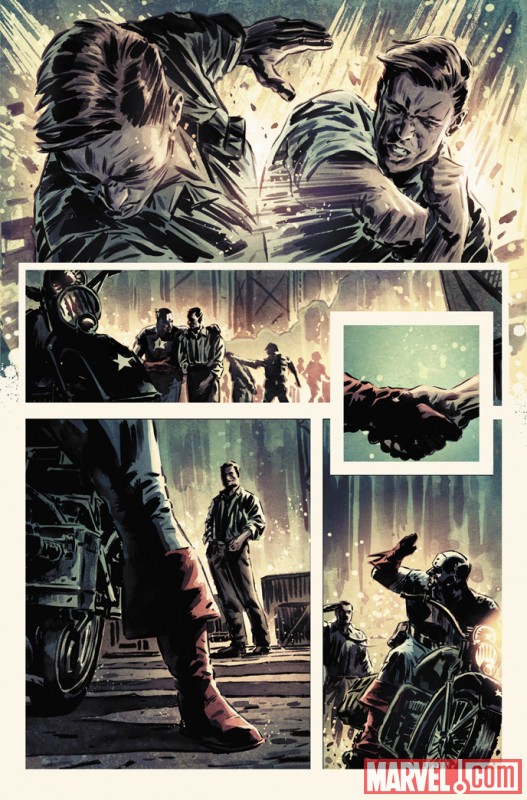 The Marvels Project narrative concludes (#8) in December 1941.  Knowledge of impending invasions both at Pearl Harbor by the Japanese and in Washington, DC by a German/Atlantean force brings the “Marvels”  into action.  The Pacific threat is met by Torch and Toro; Cap, Bucky, and Namor take up defensive positions on the East Coast. The Torches’ involvement at Pearl Harbor and the East Coast invasion were kept secret from the general public so as not to detract from the heroic efforts of the soldiers involved “who fought without the benefit of science.” 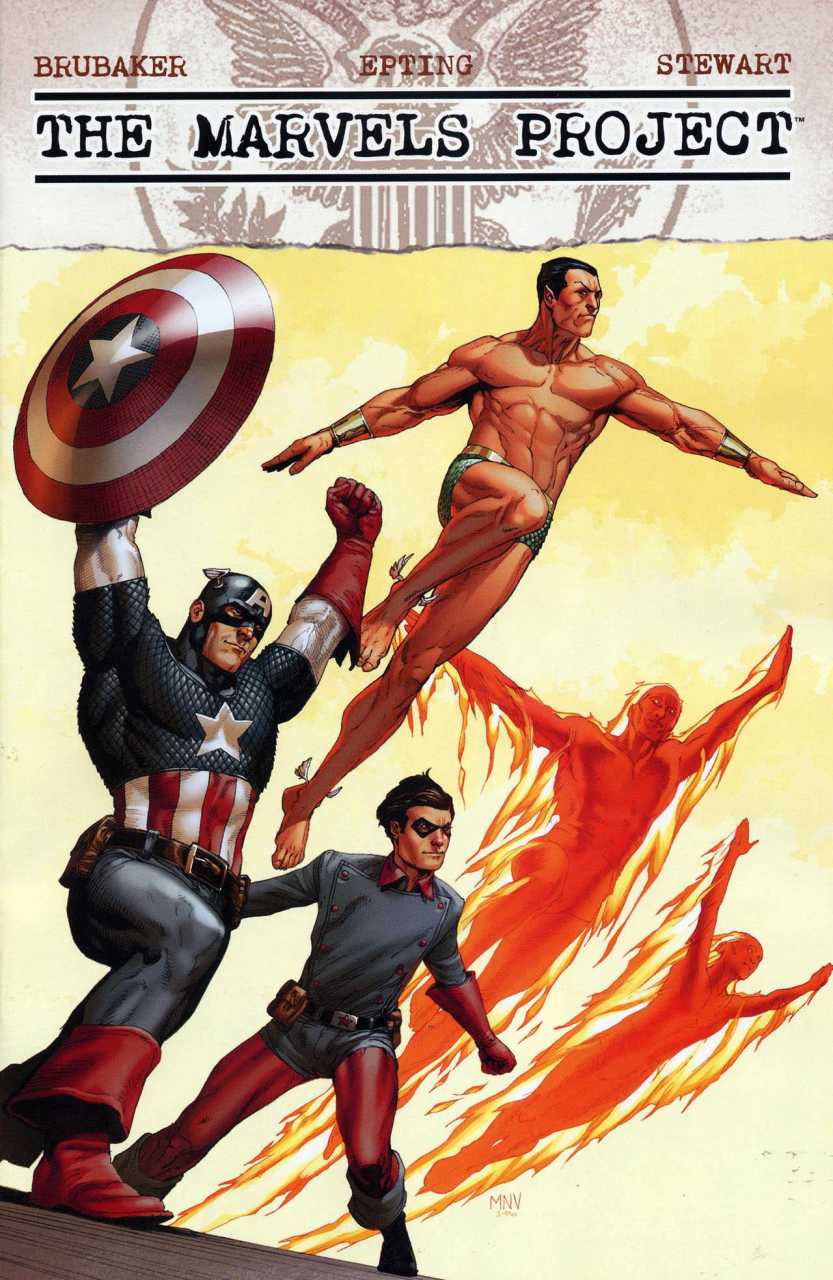 By the end of the year, FDR has commissioned a new super-human team called the Invaders.  Namor is pardoned for his crimes against humanity on the condition he join the group.  Their story is coming up soon, but before we go there, we’ll take a brief look at some of Cap’s earliest war-time adventures.

Next Up:  America Goes to War

[2] The Marvels Project #6 (April 2010), Brubaker. Namor, at this point, is unaware of an impending Atlantean collaboration with Nazis in the works during his absence.