Imagine a time when nearly all the heroes of the Marvel Universe could appear in five small panels across a single page! The image below is from the Nick Fury story in Strange Tales #156 (May 1967), by Jim Steranko. Who’s missing? Dr. Strange (but he was elsewhere in this same comic); Quicksilver (who should be in the middle Avengers panel), and Namor, the Sub-Mariner (who was more of a villain in these early days).  The mysterious Inhumans, descended from prehistoric humans genetically modified by the Kree (see below), first appeared in FF #45 (Dec. 1965) but had not yet become major players in the MU.

That was all about to change as Marvel entered a new expansion phase that brought the end of core heroes sharing Atlas-era titles and launched a whole universe of new heroes and titles.

1966-68 The Marvel Universe animated with the premier of “The Marvel Super Heroes” TV show (followed by FF, Spider-Man shows)

In 1966 Marvel also introduced two new characters that would open new horizons for the MU.  In Fantastic Four #48 the Silver Surfer arrived on Earth as the herald of the planet-consuming Galactus.  The backstory of this enigmatic cosmic surfer was told two issue later, and he was given his own title and storyline in 1968).  FF #52 introduced the Black Panther, ruler and protector of the African nation of Wakanda, the first black superhero in mainstream American comics (FF cover art by Jack Kirby, Joe Sinnot). 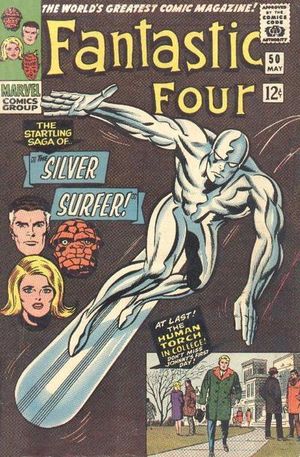 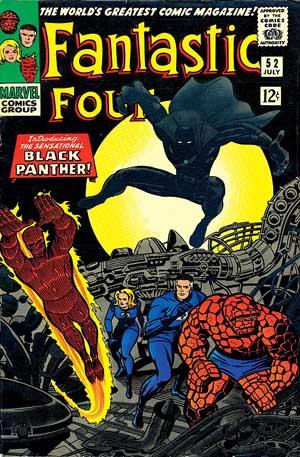 The modern MU began with the FF’s journey into space; the late 60s and early 70s brings the cosmos to Earth and takes Earth’s Mightiest Heroes to the cosmos. The expansion-minded Kree Empire sent Captain Mar-Vell to Earth as a spy, but he instead betrays his orders and becomes Captain Marvel, Earth’s cosmic protector (Marvel Superheroes #12, Dec. 1967). The original Guardians of the Galaxy fight alien invaders in the 30th century (MSH #18, Jan. 1969; they would later time-travel to the “present” in Avengers stories).  In the early 70s, one of Marvel’s first extended story arcs appears in Avengers #89-97 (1973-4), as the Avengers (along with Captain Marvel) are drawn into the Kree-Skrull War. One of the MU’s most nefarious villains, the Thanos of Titan (who debuted in Iron Man #55) makes a big splash in new-look Captain Marvel #25-33 (1973). 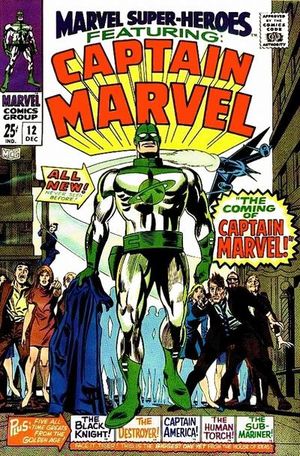 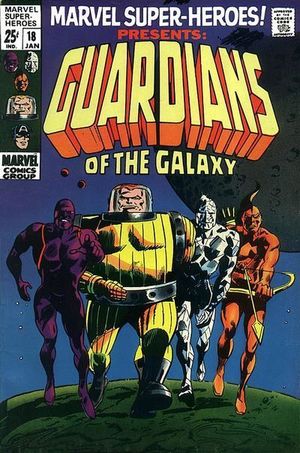 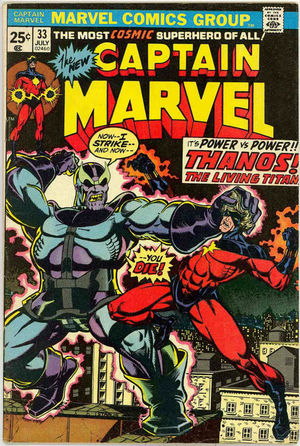 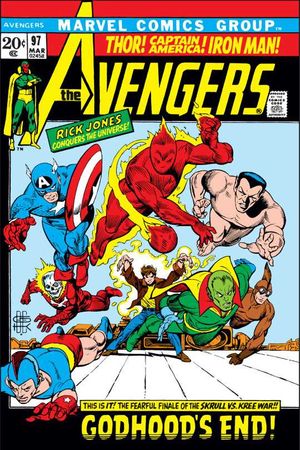 The cover of the final issue of the Avengers Kree-Skrull War  (above) depicts Rick Jones’ psychic manifestations of several Golden Age heroes:  The “Big 3” (top) plus (bottom l-r) Patriot, Blazing Skull, Vision, and the Fin.  One of the feats of “Marvel Magic” of this era was Roy Thomas’ determination to connect Timely’s Golden Age with the contemporary MU.  A modern reinterpretation of the Vision had already been introduced in Avengers #57 (Oct. 1968).  In Avengers #71 (Dec. 1969), Thomas sent the Vision, Yellowjacket, and Black Panther back in time to face the Golden Age “Big 3.”

1970-75  Thomas’ boldest Golden Age retcon came in the mid-70s, but before we go there, let’s take a quick survey of major Marvel highlights of the early to mid 1970s: 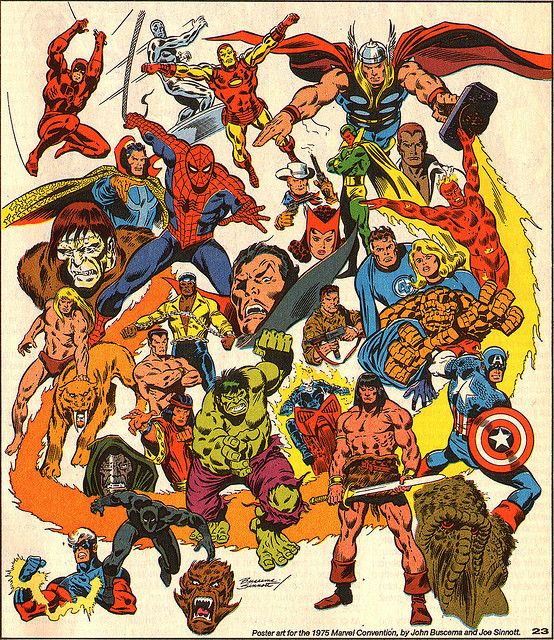 1975-80 Marvel ends out this era with the formation of several new teams and a few new characters that proved to have long-lasting appeal: 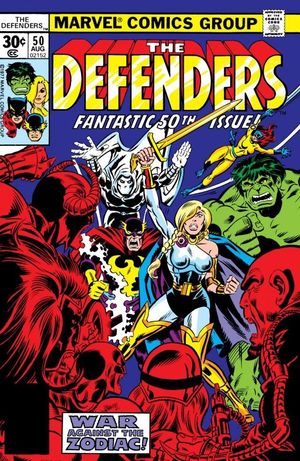 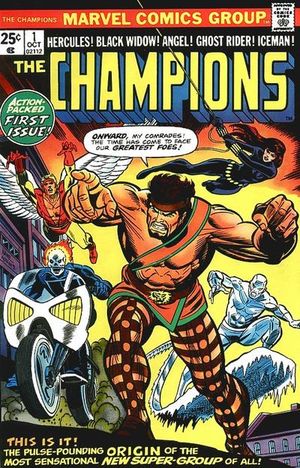 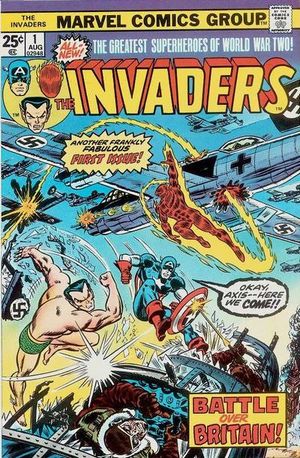 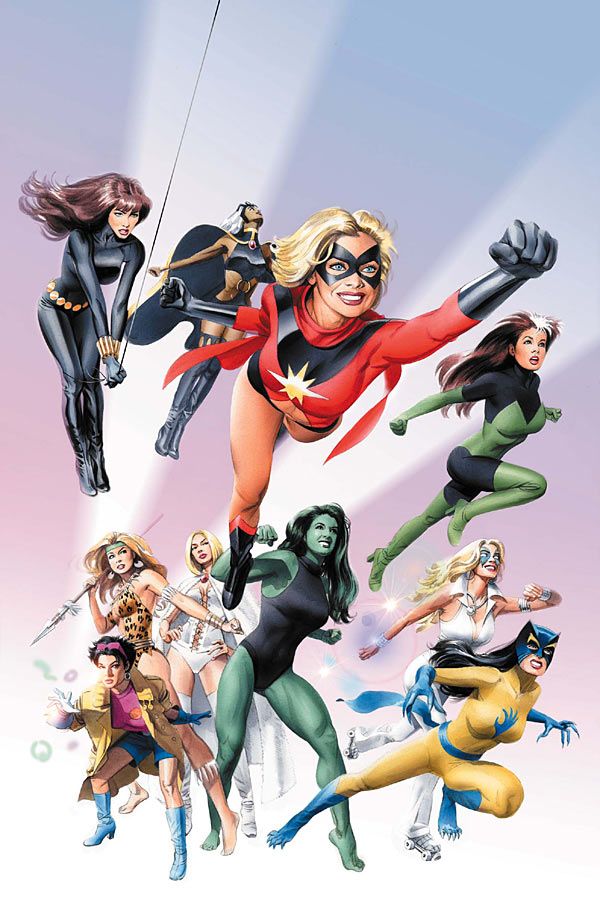 Marvel’s Women of the 70s-80s; poster by Mike Mayhew (too bad he left out Spider-Woman)

Of course, one of the major developments of Marvel’s Bronze Age was a new interpretation of the X-Men in 1975, which set the stage for the “mutant mania” of the 80s and 90s.  We’ll save that story for our next chapter..