The End of Man: Lewis on Humanity Sacrificed

In the Abolition of Man, C. S. Lewis examines the problems with “modern” education by taking to task the authors of “a book on English intended for  . . . the upper forms of schools.’”  Lewis’s concerns run far deeper than matters of methodology or curricula.  Modern education, he fears, has fallen into the hands of pseudo-intellectual “Innovators” and “Conditioners” who disdain anything smacking of traditional order.  “I am not supposing them to be bad men,” Lewis writes.  “They are, rather, not men (in the old sense) at all.”  As a result, they “sacrifice their own share in traditional humanity in order to devote themselves to deciding what ‘Humanity’ shall henceforth mean.”  At best, their work produces “men without chests.”  At worst, it facilitates the end of Man altogether. 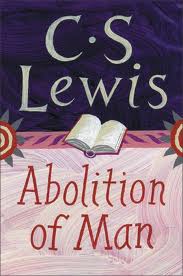 “The differences between us . . . go all the way down,” Lewis asserts.  In the new scheme, words which “appear to be saying something important” are in reality “only saying something about our own feelings” and/or advancing an agenda.  Language is relegated to articulations of subjective feeling, the mere expression of which makes the thing so.  Lewis will have none of this nominalist heresy:  “Until quite modern times all teachers and even all men believed the universe to be such that certain emotional reactions on our part could be either congruous or incongruous to it.” The objects of our emotional (and verbal and literary) responses “did not merely receive, but could merit, our approval or disapproval, our reverence or our contempt.”

Lewis also sees at the root of this transformation the modern quest to subdue “nature” to serve the needs of humanity.  In the exercise of “Man’s power” over a natural order Lewis sees a harsher reality—“What we call Man’s power is, in reality, a power possessed by some men by which they may, or may not, allow other men to profit by.”  And here lies the real danger:  through the modern emphasis on therapeutics and exercise of techniques—particularly in the areas of “eugenics and scientific education”—Man will not rest until he has “obtained full control over himself.  Human nature,” Lewis asserts, “will be the last part of nature to surrender to man.  The battle will then be won.”

This “battle,” of course, is the central theme of Lewis’s novel, That Hideous Strength.  It is being fought on many levels:  in the marriage of main characters Jane and Mark Studdock; among the “Progressive Element” and traditional “Die-Hards” on the Bracton College faculty; and most importantly (though surreptitiously) between the forces of Belbury and St. Anne’s.  As Lord Feverstone attempts to lure Mark over to work for the N.I.C.E., he speaks directly to the battle at hand:  “You’ll hear people . . . burbling away about the ‘war’ against reaction.  It never enters their heads that it might be a real war with real casualties.”  From Feverstone’s “modern” perspective, the reactionary resistance, though slumbering for centuries, was beginning to rally (as Lewis hoped it might).  “They know now that we have got real powers:  that the question of what humanity is to be is going to be decided in the next sixty years.  They’re going to fight every inch.”

Lewis’s portrayal of this great battle in the novel reaches far beyond mere cultural wars.  The deeper powers and principalities at work are brought to light as well.  The novel extends The Abolition’s criticism of modern education into (as David Mills points out) practically every area of consequence Lewis wished to comment on:  “God and man[;] marriage, sex, and the differences between men and women; academic politics; ideological languages; the nature of modernizers and reformers . . . ; industrial versus pastoral ideals; the importance of beauty of order and tradition; and the nature of the spiritual struggle, particularly the need to subordinate the ego in submission to God.” (“Great Escapes & Lesser Stories” in Touchstone, Jan/Feb 2004)